The Korean-American Educational Commission (KAEC) is a non-profit educational institution created and funded through a binational agreement between the governments of the Republic of Korea and the United States of America. Established to promote understanding and friendship between Koreans and Americans through educational and cultural exchange, KAEC aims to further the cause of world peace through its programs and the mutual understanding they create. KAEC’s primary responsibility is to administer the Fulbright Program of grants, hence it is known as the Fulbright Commission in Korea, or more simply as Fulbright Korea. KAEC additionally provides non-grant academic support services.

Globally, the Fulbright Program provides scholarships and grants to recipients who have applied for academic, research, and professional exchange opportunities in the United States and in its partner countries, such as Korea. The program’s purpose is to promote mutual understanding between the country the program is established in and the United States, and to foster future leaders and global citizens through cultural exchange, volunteerism, and the cooperation that comes from mutual respect for differing cultural values.

Worldwide, the Fulbright Program is administered by the U.S. State Department’s Bureau of Educational and Cultural Affairs (ECA) under the J. William Fulbright Foreign Scholarship Board (FFSB). Composed of recognized leaders in their respective fields, the 12 members of the FFSB are appointed by the President of the United States. The FFSB establishes and supervises the overarching policies, regulations, and management practices of the Fulbright Program, which is administered in approximately 160 countries around the world.

KAEC, as the Fulbright Commission in Korea, administers the Fulbright Program locally under the direction of 10 commission members from Korea and the United States. The Commission is headed by the U.S. Embassy in Seoul’s Minister-Counselor for Public Diplomacy who serves as Commission Chair by appointment of the U.S. Ambassador to South Korea, the honorary Commission Chair. In keeping with the binational agreement that established KAEC, and the binational funding that continues to support the Fulbright Program in Korea, the Commission includes at least two government officials from each country, with nominations for appointments made by the Ambassador on the American side and the Minister or Deputy Minister of Education on the Korean side. The remaining commission members are leaders in their respective fields with significant knowledge of U.S.-Korea relations.

In addition to administering Fulbright grants for Korean and American citizens, KAEC provides academic support services necessary to promote educational and cultural exchange. These include academic testing services and advising services through EducationUSA. As an academic testing services provider for both general and accommodated tests, KAEC administers TOEFL, GRE, LSAT, ACT, and AP tests, many of which tests are held at the Fulbright Building in Seoul. Additionally, in partnership with the U.S. Embassy in Seoul, KAEC also supports academic advisors at the Embassy’s EducationUSA Center. These advisors regularly assist students in exploring the requirements and opportunities for studying abroad in the U.S. 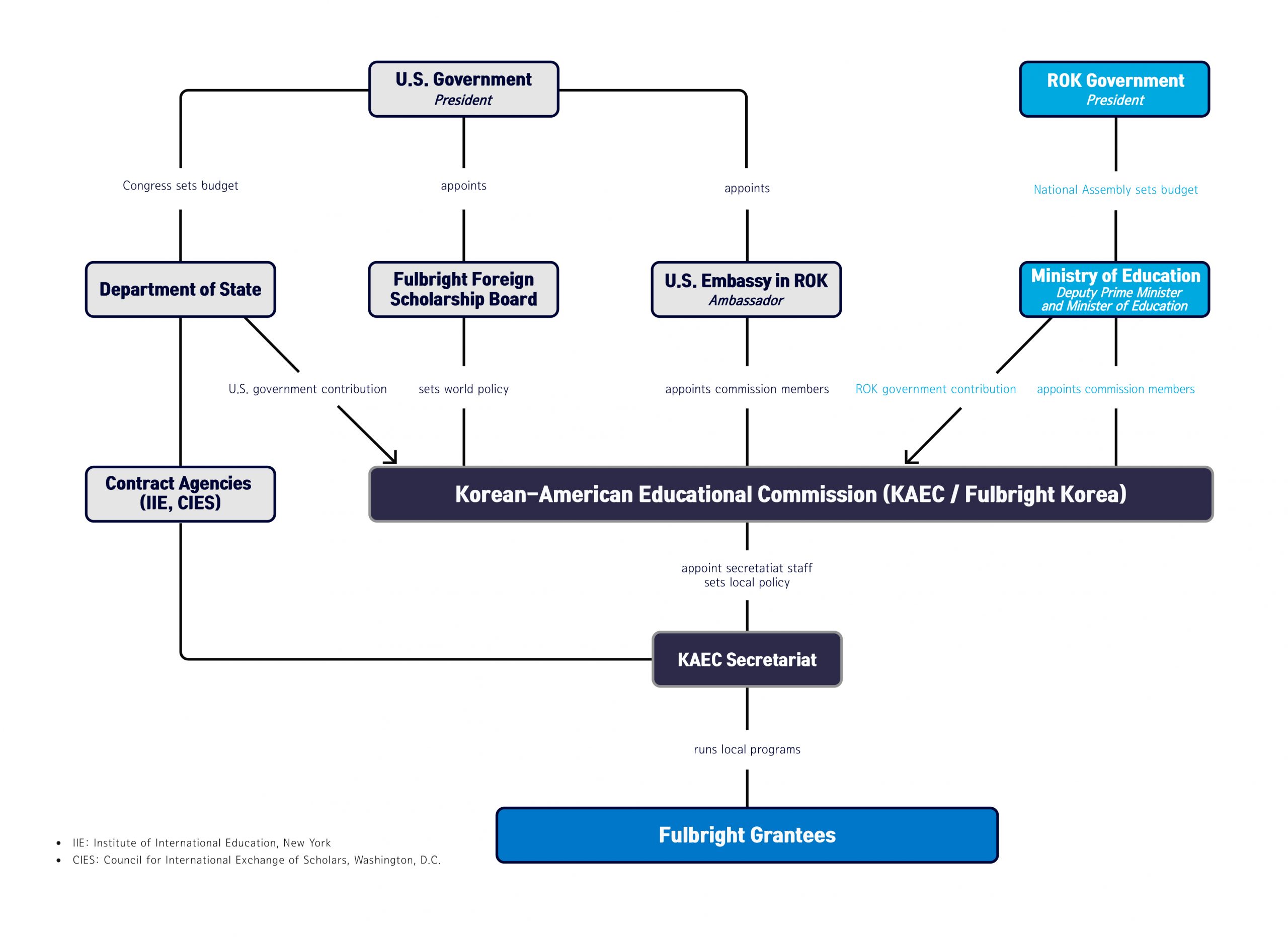